For some American ex-pats, voting in the US elections seems futile: I won’t have to live with the consequences of the American elections, so why should I continue to vote?  That may be valid reasoning for American ex-pats in some countries but for American citizens living Israel, that simply isn’t the case.  Here’s a quick glance at the issues that the US president may influence and thus, have a direct effect on your life here in Israel:

Iran.  Everyone’s talking about sanctions vs. military intervention,  but what does it have to do with the US?  Whether or not Israel will attack Iran’s nuclear facilities remains to be seen and is a subject that is widely debated.  However, the current and future US president is heavily involved in the movement to put sanctions on Iran in order to attempt to put a stop to their alleged quest to develop nuclear weapons.  In the event that Israel doeschoose to take military action against Iran, it is likely that some sort of cooperation between the two countries will be required– be it financial or military intervention from the United States.  If you’re concerned about how Israel will handle the situation with Iran, there is no question that the next US president will influence the outcome of any diplomatic and/or military interventions.

The Establishment of a Palestinian State.  Will a Palestinian State be established?  If so, where will the borders be drawn? What will happen to Israeli settlements in the West Bank? To what extent will Israel be able to defend its new borders?  If these are all questions whose answers are important to you, it’s imperative to acknowledge the fact that the current and future US president, for better or for worse, have a large influence on the negotiations that take place.

Jerusalem.  Will Jerusalem be split into two entities, or will it remain the undivided capital of the Jewish State? Will Jews be able to build homes in East Jerusalem?  Similar to the negotiations and talks surrounding the issue of a Palestinian State, the American president is involved in these negotiations and arguably has a large amount of influence on Israel policies, given the close relationship between the two governments.

Defense Budget & the Economy. The US gives Israel millions of dollars in aid each year, much of which is at the discretion of the US president.  Whether or not Israel could maintain the status quo without this money is widely debated but the question really is– do we want to find out?

This is just a sampling of the issues that will likely be influenced by the next US president, and they all have a direct effect on our lives here in Israel.  For that reason, iVoteIsrael urges those of us who are concerned about Israel’s safety and security to vote in the upcoming US elections for the candidate that YOU think would make the best choices regarding Israel.  If you’re worried about whether or not your absentee vote will actually be counted, read this.  If you’re worried about the IRS, click here.

Even better, if you’re ready to register for your absentee ballot in 2 minutes or less, free of charge, go to iVoteIsrael and do it now!

The US elections are rapidly approaching, as are the state deadlines for registration- yet, some of you still are not sure if you want to vote.

Seems like the momentum is really picking up with respect to the US presidential elections.  As an American living in Israel, it’s your job to keep up!  We’ve made it a bit easier and compiled a few interesting articles for you:

As some of you may know (and if you don’t, take a look at our Facebook photo album!), iVoteIsrael hosted former White House Press Secretary of the Bush Administration, Ari Fleischer, and Matt Brooks, Executive Director of the Republican Jewish Coalition.  Ari and Matt came as Republicans who support Romney, but iVoteIsrael remains a non-partisan organization who simply provided a platform for them to speak.  We will provide a similar platform for a Democrat in the coming weeks.

Ari and Matt traveled to the US to urge American citizens in Israel to vote and made the case that not only are absentee ballots counted, but that the approximately 163,000 eligible voters living in Israel could significantly influence the outcome of the US presidential elections– especially given the fact that polls are showing that Obama and Romney are neck and neck.  Fleischer said this as a ‘survivor’ of the Florida recount in 2000, in which the election was in the hands of just over 500 voters.

As iVoteIsrael employees, we got to spend quite a bit of time with Ari and Matt last week and in addition to scheduled events, got to hear quite a few interesting tidbits.

First of all, at the Psagot Winery, we found out that Matt Brooks is a wine connesuir.  He taught our very own Voting Wizard/Expert/Campaign Coordinator, Shira Woolf,  how to swirl her wine before drinking it.

Not only that, but Matt treated us to goodbye drinks and chose a delicious Israeli wine called ‘The Cave’- which this lucky blogger got to finish up on Shabbat.

Ari told us that he grew up a liberal democrat.  What changed him?  Jimmy Carter.   He told us that his mom often voted for democratic candidates and that when Ari worked with former President Bush, the president would always ask, regarding Ari’s mother, “Do I have her yet?”   The answer remains a mystery! 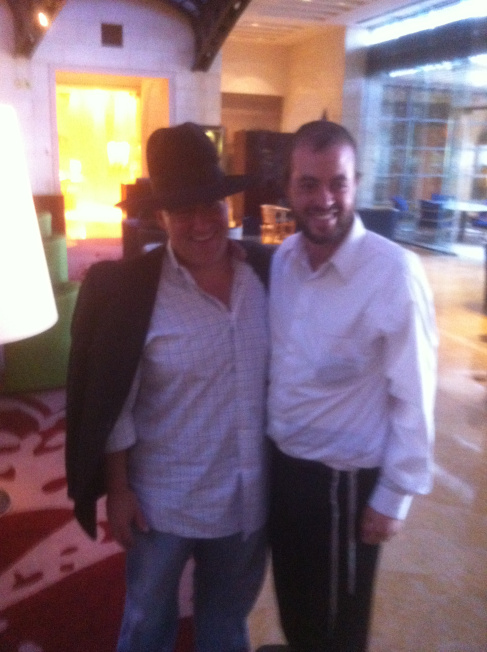 Matt Brooks in a black hat with Agudah’s Rav Shmuely Machlis…. perhaps his next career move will necessitate the title, “Rav Matt?”

When asked about a rewarding moment in his career, Ari told us about a woman who lost her husband in the 9/11 attacks.  She told Ari that when he was on TV during the time following the attacks, he made her feel calm.

Curious about Ari and Matt’s visit? Check out some of the posts by the bloggers who attended our press conference (below).  Also, check out @ivoteisrael on Twitter for quotes from the events.

© 2020 Worldwide by iVoteIsrael, a project of Americans for Jerusalem, a registered 501(c)4. All rights reserved. Does not support any candidate or candidate’s committee.

iVoteIsrael respects and protects the privacy of its users.

The Organization is committed to processing data in accordance with its responsibilities under the GDPR.

Article 5 of the GDPR requires that personal data shall be:

In the event of a breach of security leading to the accidental or unlawful destruction, loss, alteration, unauthorised disclosure of, or access to, personal data, the Organization shall promptly assess the risk to people’s rights and freedoms and if appropriate report this breach to the ICO (more information on the ICO website).

Any cookies that may not be particularly necessary for the website to function and is used specifically to collect user personal data via analytics, ads, other embedded contents are termed as non-necessary cookies. It is mandatory to procure user consent prior to running these cookies on your website.